Bitcoin has fatal flaws and is now a novelty, not the currency of the future

In many things, being first to market gives you an insurmountable lead but technology is not one of those things.

In technology, the winner isn’t who comes first, it’s who has the best technology.
Few
would still argue that bitcoin is the best-designed crypto currency.
It’s slow, its governance is a mess and it has a critical flaw — energy
use.

Berkshire Hathaway deputy Charlie Munger nearly top-ticked it with his scathing comments on May 2:

I don’t welcome a currency that’s so useful to kidnappers and
extortionists and so forth, nor do I like just shuffling out of your
extra billions of billions of dollars to somebody who just invented a
new financial product out of thin air.

I think I should say modestly that the whole damn development is disgusting and contrary to the interests of civilization.

With the Colonial Pipeline shutdown ongoing, he has a point. Bloomberg reports that $350m was sent to cryptocurrency wallets associated with ransomware attacks last year.

Of
course, Munger been hating on bitcoin for years so I shouldn’t give him
too much credit. What’s new today is that Elon Musk has made a U-turn
on bitcoin in a statement:

“Tesla
has suspended vehicle purchases using bitcoin. We are concerned about
rapidly increasing use of fossil fuels for bitcoin mining and
transactions, especially coal, which has the worst emissions of any
fuel.

Cryptocurrency is a good idea on
many levels and we believe it has a promising future, but this cannot
come at great cost to the environment.”

He left
the door open to using it again if it transitions to better energy use
but that’s not realistic. If a Chinese miner uses only renewable energy,
that energy could still be attached to the grid to displace coal. It’s a
no-win situation for bitcoin.

The market reaction has been punishing: 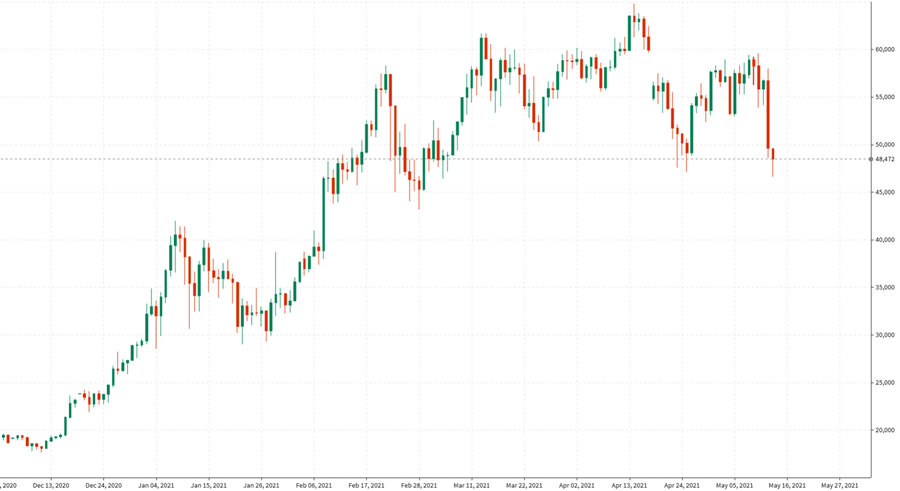 I
have said that
I believed bitcoin would get to $100,000 this year on a US ETF but the
tide has quickly turned and I’m wondering if the SEC might draw the same
conclusion. Ultimately, bitcoin is a psychological trade, not a
fundamental
one. When I first predicted
bitcoin would hit $10,000 back in 2013, it was because there were so
many ‘true believers’. I was astounded by their commitment to it and I
also recognized its value to money launderers and criminals.

Now,
the tide has turned. The true believers are losing faith. The flaws in
bitcoin are inarguable and like many early technologies, something
better will come along. It’s clear that’s already happened but with so
many cryptos, one will have to emerge that solves all the problems
bitcoin set out to. I don’t know which one that is, but it’s coming.

When
I read through the replies to Musk’s tweet, it’s clear we’re in a bit
of a ‘denial’ phase of grief, but ultimately there will be mourning and
people will move on (suddenly poorer no doubt). Price action has a way
of accelerating that process.

Bitcoin isn’t
going to zero. It will always have a cachet but it’s not the currency of
the future and it’s time everyone stopped pretending that. It’s also
going to prove to be a dismal store of value. That will give some life
back to gold, which has been doing its thing for 4000 years.

For now though, the trade is simply to get out of the way.