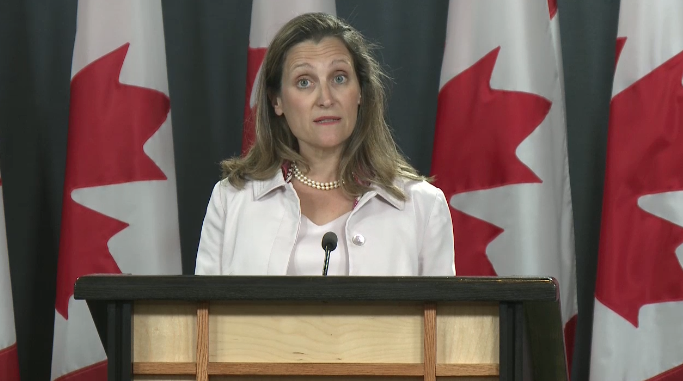 Canada hasn’t had a Federal budget in more than two years due to a series of emergency measures alongside covid. In that time, the deficit has soared with Canada spending more than any other G7 country per capita.

Today we get a new version at 2000 GMT (4 pm ET). The loonie is softening ahead of the plan and is the worst G10 performer, perhaps with the uncertainty around it weighing. Equity weakness is also a factor and USD/CAD is up 30 pips to 1.2537 after falling as low as 1.2471 (a one-month low).

Finance Minister Christia Freeland’s budget has mostly leaked, with the Globe and Mail saying it “includes an extension of wage and rent subsidies through to September,
$100-billion of new stimulus money for housing, transit and green
technology, and sets the stage for a national $10-a-day child-care
program.”

An interesting program is one that would offer SMEs a hiring incentive that would cover up to $1100 per month.

Housing is a preoccupation in Canada at the moment with prices up 30% year-over-year. Freeland will reportedly add $6B to a previous $1B federal program to build more housing.

On the demand side, there’s a national tax coming to curb foreign speculation with penalties coming for vacant homes. That will be particularly closely-watched.

On the tax side, Reuters reports that the budget will include a sales tax for online platforms and e-commerce
warehouses starting from July and a digital services tax on big web
companies starting from Jan. 1, 2022.

The Liberals govern with a minority but the NDP has already indicated it won’t spark an election over the budget.