The price of oil had a down and up ride today as concerns about a covid slowdown and mid-east (Iranian?) tensions weighed on prices before lifting them back up.  The run to the downside took the price of crude back below the $70 level to a low of $69.18, before the rebound back higher (the price is trading at around $70.50 currently). Nevertheless, the price is still down about $80 on the day or -1.11%. 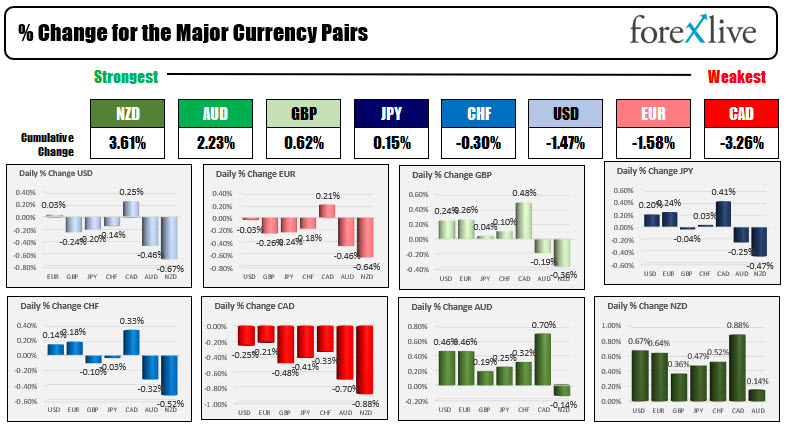 The run to the downside, helped to kick the CAD lower. It started the day as the weakest of the majors, and remains the weakest at the end of the day.  On the other extreme the NZD and the AUD are the strongest of the majors. For the NZD, the government announce that they would look to slow the housing market, by tightening the lending standards.  It was further boosted along with the AUD after the Reserve Bank of Australia announced no changes to its QE/tapering plans for the time being. They brushed aside the recent virus outbreak by saying that IF it gets contained then the economy would be able to bounce back quickly.  Of course it is the “IF” that matters, but the market went with expectations all will be ok, and the RBA taper is on track.

The USD, meanwhile was mostly lower today weighed down by the lower oil and despite better Factory orders/durable goods orders (1.5% vs 1.0% estimate).

In the European equity market, the major indices closed mostly higher. The German Dax is down about -0.1% and the Italy’s FTSE MIB closed near unchanged. The best performer was the France’s CAC which rose by 0.7%.

Looking at the technicals of some of the major currencies going into the new trading day:

Tomorrow the US ADP report will be released at 8:15 AM ET with expectations near 700 K. It will act as a barometer for the jobs report scheduled for release on Friday at 8:30 AM ET.

Also of significance is the scheduled speaking engagement of Fed Governor and Vice Chair Richard Clarida.  The market will be focused on the  timetable for his expectations for a taper.