The US dollar moved sharply higher after better data and on expectations for a strong US jobs report tomorrow at 8:30 AM ET (1230 PM GMT).  Looking at the rankings of the strongest of the weakest today, the US dollar was the runaway strongest, while the NZD and the AUD battled it out for the weakest currency distinction. 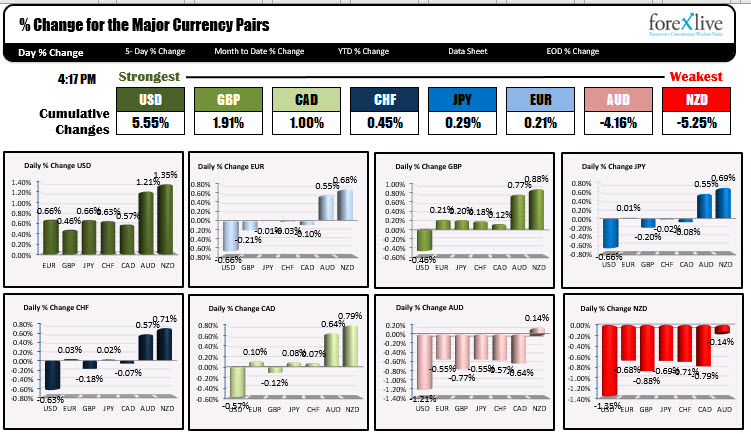 Fundamentally, the ADP report for May showed a larger then expect a gain of 978K vs expectations of 650K.

Now the recent data in the ADP is not necessarily reflective of NFP job growth number. Case in point, last month NFP came in at 266K while the ADP was revised lower to 654K (from 742K).

Nevertheless, the expectations for nonfarm payroll is looking for a rebound to 674K, and there is some chatter that the number is due to show something bigger after the  unexpected weaker than expected gain last month. We will now at 8:30 AM ET tomorrow morning.

Also reported today was the initial jobless claims. The claims number today came in at 385K which was the lowest level since 256K before the pandemic shutdown last March. Now it’s not the survey week (the claims were at 444K during that week), but the number during the survey week was still lower than the prior month  (444K vs 566K).

Not looking so great was the dip in the employment component of the ISM nonmanufacturing index which can in at 55.3 versus 58.8 in the prior week. The ISM manufacturing employment index was also lower at 50.9 versus 55.1.

As always, the employment report is a wildcard and could lead to volatile and choppy trading conditions as market participants sift through the details. As Adam points out, the job losses since the pandemic are still 8– 10 million short of pre-pandemic levels. That seems to be a guiding light for the Fed officials who are happy to ignore the jump in inflation (transitory) in favor of increasing the number of people employed.

For today however, the forex market bid up the dollar. For a full preview of the employment report CLICK HERE.

US stocks reacted negatively to the rise in the dollar and rising interest rates. All the major indices close lower. The Dow industrial average snapped its five day winning streak. The S&P index is now down 2 of 3 trading days. The NASDAQ index led the declines with a decline of -1.03%

European shares closed mixed with German and Italian markets rising while UK, France, and Spain all declined. Below are a summary of the price action for the major indices in North America and Europe.