As much as vaccinations are providing a solid base for major economies to build the latest recovery trajectory, it isn’t really a given.

The virus mutation is still a major risk to contend with and there are still more questions than answers when it comes to the delta variant and how that is going to impact the global recovery, especially when you consider global travel reopening.

Australia is one of the big victims of this now but then again, the pace of vaccinations there has been rather lackluster as compared to the likes of the US, UK, and Europe.

Personally, I don’t believe the market is attaching a high risk or much concern to the spread of the delta variant but it is something worth keeping tabs on at least.

If anything else, it will definitely have a strong impact on damaging the recovery prospects in emerging economies since vaccinations in those regions are still moving slowly.

Adding to the fact that there is sort of a “chain effect” from the delta variant harming other economies is that this just means that supply bottlenecks are going to persist for much longer as we now look towards 2H 2021.

Major central banks are still going to brush said impact on inflation as ‘transitory’ but how long exactly that will be is still up for anyone’s guess at this point.

As disruptions to the supply chain persist and high cost inflation becomes more prevalent, that in turn will also place a dent on global recovery prospects in general.

As such, don’t discount the risk posed by the supposed rising price pressures.

I would argue as the market comes to terms with that and if the data starts to show some signs of a slowdown in the latest recovery patch, any major rise in bond yields may also be hard to come by as the conviction gets watered down.

While the current cycle of growth and inflation may be the highest for some time yet, it still isn’t going to change the outlook for rates in the long-term.

The key impediment here is that sustained growth is starting to become a thing of the past as debt continues to implode and the latest round of fiscal stimulus to deal with the pandemic is just exacerbating such negative conditions i.e. relying too much on debt.

The Fed returning to raising rates may spark a tailwind for yields in the years ahead but looking out ten years down the road, this is likely just a blip. The trend in yields is clear and the fundamentals tell us nothing is going to change that: 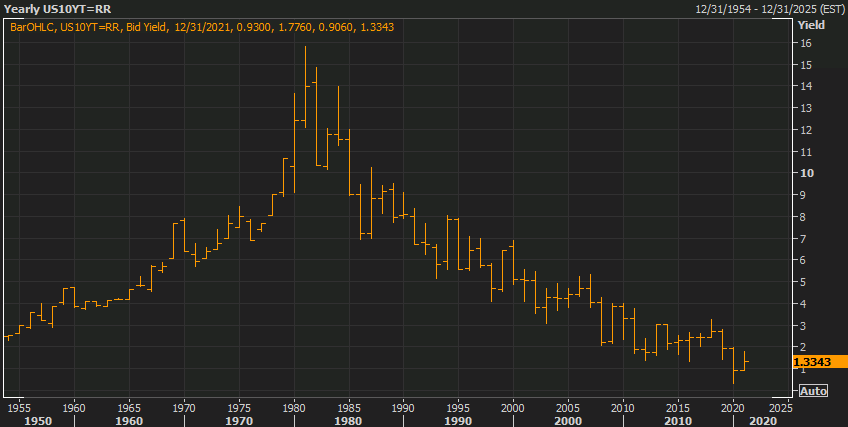 That is unless fiscal conservatism is no longer part of the political agenda.