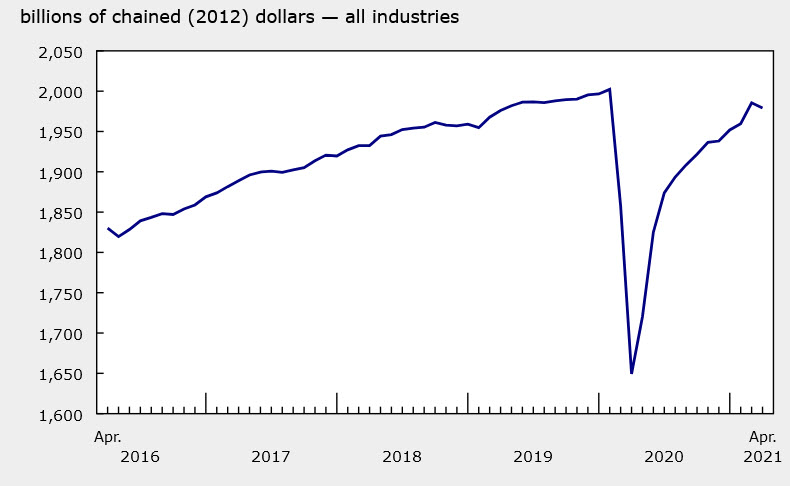 You wouldn’t know from the loonie’s performance but today’s GDP report was a positive surprise at -0.3% m/m compared to -0.8% expected.

The softness in the loonie is likely due to quarter end but with oil and risk bid, there is fuel in the gas tank for July. The Canadian dollar was the best G10 performer in the first half of the year.

April and May are a trough for growth because of harsh lockdowns in part of the country. Once again, the economy proved much more resilient than anticipated to closures and that means Q2 will be positive, according to CIBC.

“The Canadian economy hit a rough patch in April and May, but the ride wasn’t as bumpy as expected. As a result, the
economy seems likely to eke out an annualized growth rate roughly 2 1/2% in the second quarter, in contrast to our
previous expectation of no growth,” economists at CIBC wrote in a note.

They’re watching the housing and construction sector going forward.  It provided a surprise boost in April but slowing starts will bite in May and beyond. Home resale activity is also slowing (though prices remain sky high).

CIBC didn’t change its timeline for Bank of Canada hikes. The next BOC decision is July 14 and there are currently no scheduled speeches beforehand.

“With the Canadian economy less bruised by the third wave than expected, we’re more
confident that the level of economic activity will reach its pre-Covid peak some time in the third quarter. That said, even
after attaining that milestone, there will still be slack in the economy to soak up. As a result, the Bank of Canada won’t be
in any rush to hike rates,” CIBC wrote.