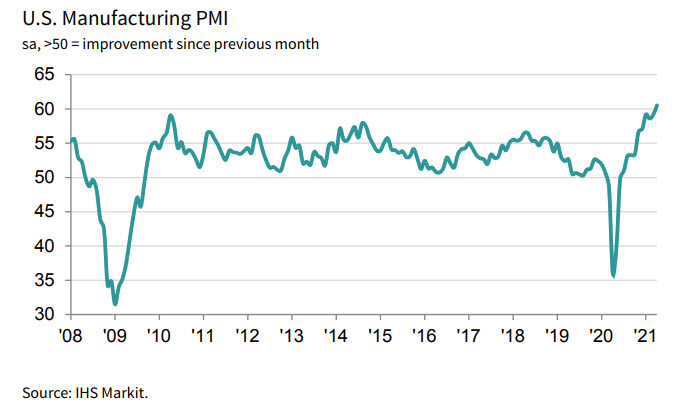 “US manufacturers reported the biggest boom in at least
14 years during April. Demand surged at a pace not seen for
11 years amid growing recovery hopes and fresh stimulus
measures.

“Supply chain delays worsened, however, running at the
highest yet recorded by the survey, choking production at
many companies. Worst affected were consumer-facing firms,
where a lack of inputs has caused production to fall below
order book growth to a record extent in over the past two
months as household spending leapt higher.

“Suppliers have been able to command higher prices due to
the strength of demand for inputs, pushing material costs
higher at a rate not seen since 2008.

“Attempts to expand capacity via hiring extra staff gained
further momentum, though in some cases staff shortages
were an additional constraint on production. However,
with confidence in the outlook continuing to run at one of
the highest levels seen over the past seven years, buoyed
by vaccine roll-outs and stimulus, further investment in
production capacity should be seen in coming months,
helping alleviate some of the price pressures.”

There is good and bad in the report. The supply chain issues, shortage of workers are concerns for potential growth and also inflation.