A weak dollar and positive mood in markets is normally a good sign for commodities but that’s not exactly the case today.

In oil, suspect the market is pricing in an Iran deal or at least raising the odds. Everything I’ve heard makes me virtually certain a deal is coming but I’m struggling to assign a market probability to it. I ran a poll yesterday and there is nothing close to a consensus: 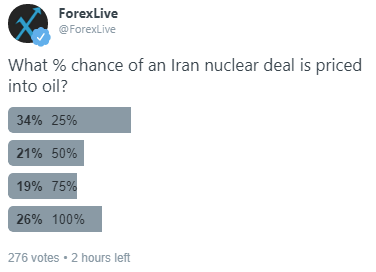 Today, Iran’s president Rouhani said world powers have accepted that major sanctions will be lifted and that they’re working on the ‘finer points.’

Despite that poll, I have to assume this latest move has priced in a deal. The larger question is how much oil comes, and when. Citi sees an initial 500K bpd increase in supply in the middle of the third quarter. I think it could come more quickly.

As for headline risks, they’ll dissipate for a few days but negotiators are beginning to plan for a final round of talks in Vienna next Tuesday.

OPEC+ is looked in through June so it’s all about demand now. Europe, Canada and some other countries will open in June and US driving continues to increase.

As for the chart, the failed break above the May highs and the break below the May lows with a minimal bounce today is decidedly bearish. I expect to see a test of $60 and possibly a squeeze down to $58. 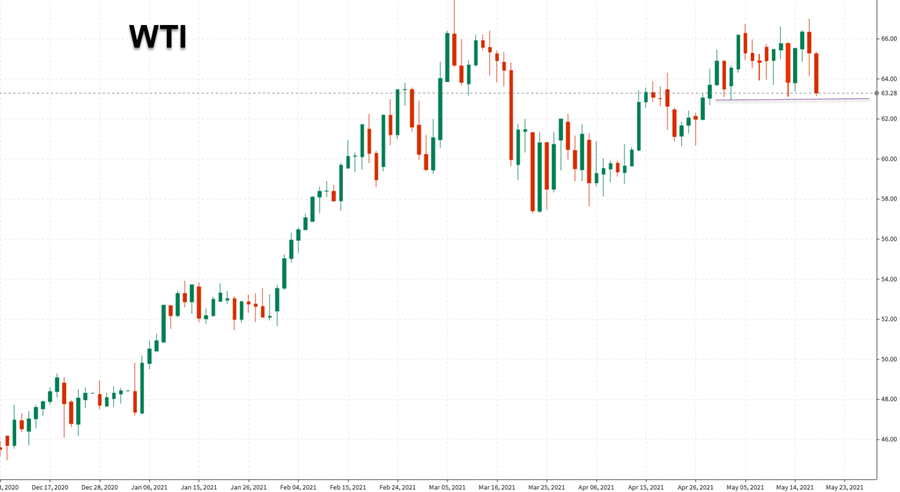 If it falls below $58 there a possibility of a double top targeting $48-50. That’s a tough number to believe but anything is possible in the oil market.