It was a quiet day from an economic standpoint. The only release was the Chicago Fed National Activity index which is a compilation of 85 economic indictors. It came out worse than expected and lower than last month although the index was still positive.

There was the usual Fedspeak which if not necessarily on topic (Brainard made a speech on central bank digital currency) was not surprising given the recent theme from Fed officials that policy was still on hold with expectations for higher transitory inflation. Fed’s Bostic, Bullard, and Brainard all spoke.

BOE officials – led by Governor Bailey and including members Cunlliffe, Haldane, Saunders – testified to UK lawmakers. Like Fed officials, the comments and prepared text did not move the needle much in the UK.  At the start of the proceedings the GBPUSD was trading around 1.4158. It is currently trading around the same level to end the trading day.  The 100 hour MA for the pair is also near that level now after drifting modestly lower through the day.

The strongest currency today was the NZD, while the weakest were the USD and the GBP. The EUR was the strongest at the start of the trading day, helped by a run higher in the EURGBP, but backed off in the North American session. 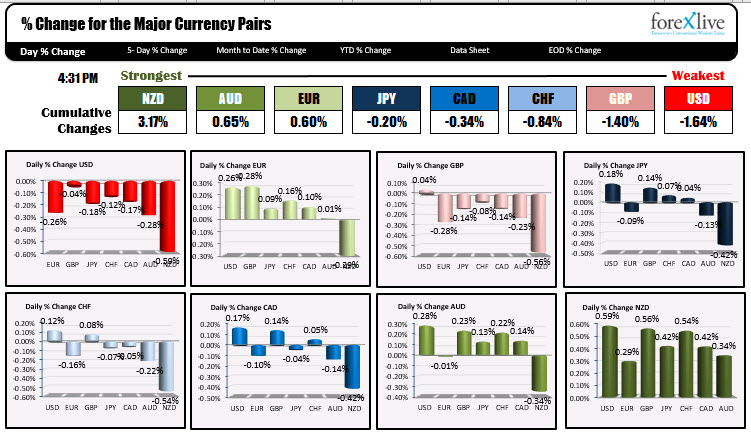 The USD was more mixed at the start of the day, but with yields staying modestly soft and the US stocks running higher, the flow of funds were out of the safety of the USD and more into the risk currencies.  The 10 year yield move down2 basis points today while the 30 year fell -1.7 basis points.

In the US stock market, the move to the upside was led by the Nasdaq index (up 1.41%).  The S&P index rose by nearly 1%. The Dow was up for the 3rd straight day.  Gains were made across the board on the markets acceptance – at least for the day – that the corporate earnings gravy train would continue with the support of the Federal Reserve.

Will work nine In Europe, German and Switzerland were off on holiday today, but UK, France,  closed higher. Spain’s Ibex was flat and the Italy’s FTSE MIB was negative.

Bitcoin moved up to test the $40000 level again after trading as low as $31500 over the weekend.   Dip buyers were later helped by a favorable tweet by Elon Musk late in the day.