In the US debt market today, yields fell with the 5and 10 year yields down -3.9 and -3.8 basis points respectively. The  30 year yield is trading lower but not on par with the declines in the short term issues. It is trading at 2.399% after a sloppy 30 year bond auction. The high yield at the auction came in at 2.395% which was 1.8 basis points higher than the WI at the time of the bidding.  The reaction post the auction was not all that bad given the large tail.  In contrast the 10 year was sold yesterday at a yield 1.3 bps lower than the WI level. Overall, with fears of a run higher in yields ahead of the supply this week, the markets survived and were unscathed.

From a fundamental standpoint today, the PPI final demand came in higher-than-expected at 0.6% versus 0.3% estimate. Ex food and energy rose by 0.7% versus 0.4%. Although higher, then expectations, the market took the numbers in stride today (versus the reaction from the CPI yesterday). PPI prices can go higher without making their way into the CPI data, although the last two months have seen an increase of 1.6% for the headline data, and some of the gains from last month seemed to have made their way into the consumer prices this month. Whether that trend will continue is to be seen.

Other fundamental data showed initial claims falling to 473K from 507K last week. The number was the lowest since March 14, 2020 when it was at 256K (and just before the pandemic’s historic spike higher).

In the US, the major stock indices snapped three days losing streaks. The Dow industrial average rose by 1.29%, while the S&P gained 1.22%. Below is a summary of the percentage changes of the major global indices for trading today. 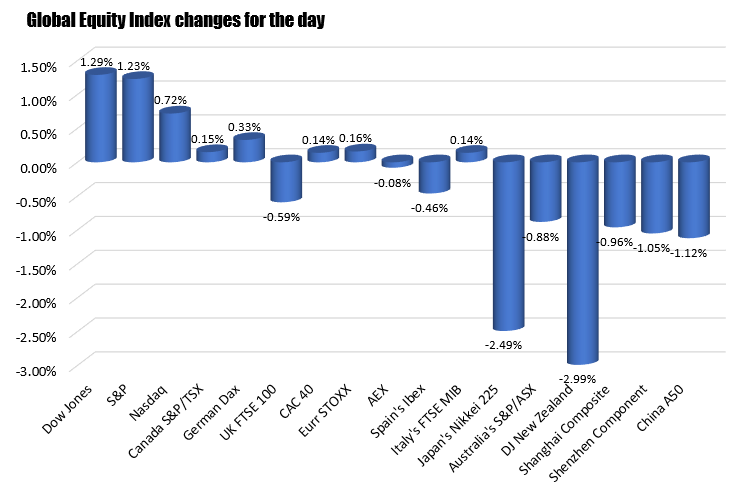 In the forex market today, the NZD and CHF are neck and neck for the strongest of the majors, while the CAD is the weakest. 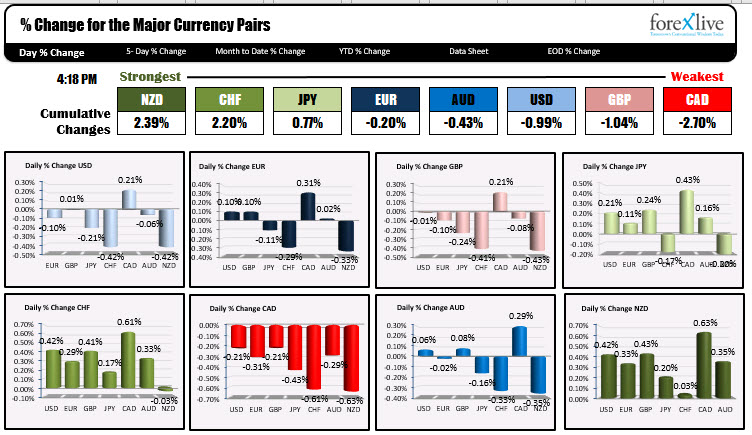 BOC Macklem warned that if the  CAD were to continue to strengthen, particularly if it wasn’t reflecting better news on the Canadian dollar, that could be a headwind.  He also added, if CAD ‘moves a lot further, that could have a material impact on our outlook and it’s something we would have to take account of in our policy’. The comments took some of the wind out of the strong loonie (traded to the lowest level since 2015 this week) and pushed the price to a test and move above  its 200 hour MA at 1.2181 (before rotating lower into the close. That level wlll be eyed as a barometer for buyers and sellers in the new trading day.