The USD is mixed

As the North American session begins, the GBP is the strongest and the NZD is the weakest after the RBNZ kept the OCR unchanged after their policy meeting.  RBNZ Governor Orr was supremely confident and characterized the pause in rates as something akin to a blip. His comments on housing – and similar comments in the statement –  was overwhelmingly upbeat and that sent NZD/USD higher soon after the decision, but the pair has moved lower since the run higher and trades nearer the lows for the day. The USD is mixed in early trading with gains vs the JPY, CHF and NZD and declines vs the EUR, GBP and CAD.  The greenback is unchanged vs the AUD.  Boston Fed’s Rosengren joined the more hawkish camp saying bond purchases aren’t the right policy tool to address economy’s current problems. 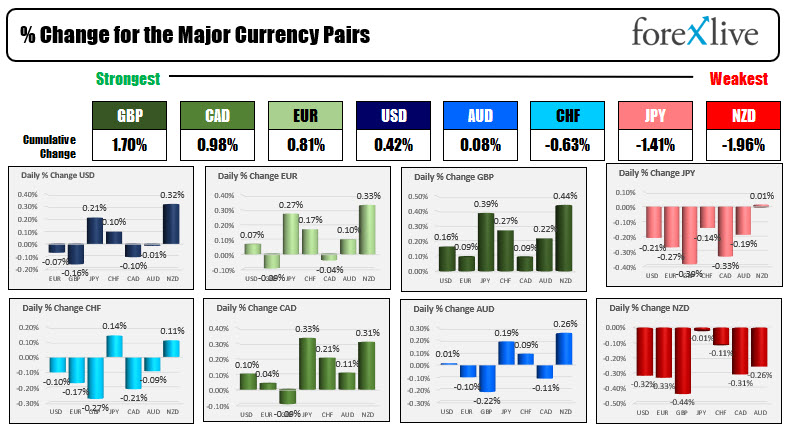 Looking at the ranges, the EURUSD, GBPUSD, USDJPY, USDCHF, USDCAD, and AUDUSD all have low to high trading ranges of 38 pips or less with the EURUSD at a smallish 28 pips (vs a month long average of 51 pips). The NZD pairs have oversized ranges as a result of the volatility after the rate decision.

A look at other markets as North American trading gets underway:

In the premarket for US stocks, the major indices are mixed after declines yesterday broke the five date industry for the S&P and Dow industrial average. The NASDAQ decline for the second consecutive day

In the US debt market, yields are higher by a few basis points further at the curve. The U.S. Treasury will auction off 20 year bonds at 1 PM ET.

In the European debt markets, the benchmark 10 year yields are also higher across the board: