The NZD is the strongest and the AUD is the weakest of the major currencies as the North American session gets underway. The USD it is mostly higher with only a modest decline against the NZD.  However, of note is the currencies are scrunched together with ranges and changes relatively narrow as traders await the US CPI data at the bottom of the hour. The CPI is expected to rise by 0.5% versus 0.9% last month with the core rising by 0.4%. The year on year is expected to rise to 5.3% which is just below the 5.4% from June (the largest since August 2008).  The US Senate passed the $1 trillion infrastructure package and now heads to the House of Representatives for approval.  The White House announced that the are looking to lower the price of oil.  They consulted with Saudi Arabia regarding production. 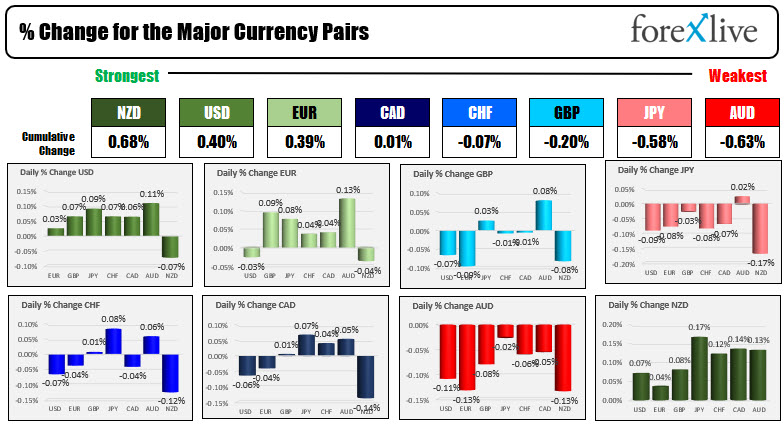 Looking at some of the ranges of the major currency pairs, there are a number of the pairs with less than 50% ranges vs the 22 day averages (about a month of trading).  The NZDUSD and USDCAD are only 37% of the normal range (24 pips and 32 pip ranges respectively. The EURUSD range is even less at 36% with only a 19 pip trading range.  Traders waiting for the CPI data? They are certainly looking for the next shove in either direction.

In the premarket for the US stock market, the major indices are near unchanged/lower marginally. The Dow and S&P both closed at record levels yesterday

IN the European market, the major indices are trading higher. The France’s CAC is trading at highest level since 2020 and approaches the all-time high price from that time at 6944 (it is trading at 6837 currently)

The US debt market, the yields are higher ahead of the key inflation data with the 10 year up 2.7 basis points. The U.S. Treasury will auction off 10 year notes at 1 PM ET today.

In Europe the benchmark 10 year yields are also higher with: