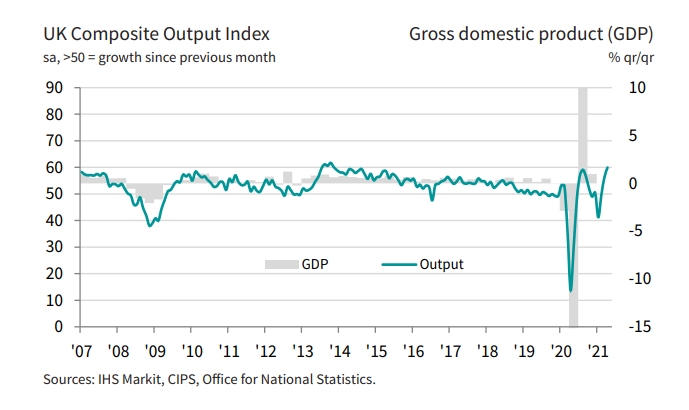 A solid beat in the headline reading, which comes in at a 80-month high with the manufacturing reading being at its highest level in nearly 27 years. The composite reading also shows a strong beat, coming in at a 89-month high.

The looser virus restrictions certainly helped to bolster economic and business activity and is a welcome development, which sets the tone for what to expect moving forward.

Business expectations for the next 12 months held close to the series-record high seen in March, so that gives an idea of the outlook. Markit notes that:

“Companies are reporting a surge in demand for both goods
and services as the economy opens up from lockdowns and
the encouraging vaccine roll-out adds to a brighter outlook.
In more than 23 years of PMI history, we have only seen one
spell of faster growth than this, recorded between August and
November 2013.

“Business activity should continue to grow strongly in May and
June as virus restrictions are eased further, setting the scene
for a bumper second quarter for the economy.
“There’s also good news for the job market. With optimism
about the year ahead continuing to run close to March’s
all-time high, firms have been encouraged firms to take on
extra staff at a rate not seen for over three and a half years.

“There are some causes for concern, however, as export
performance remains relatively lacklustre, often linked to
post-Brexit trading conditions, and prices continue to rise
sharply.
“Although exports returned to growth after three months of
decline, the rate of increase remained relatively subdued
compared to export trends seen in many other economies.

“Prices charged for goods by manufacturers are meanwhile
rising at a rate not seen for a decade, linked to higher global
prices for many inputs and near-record supply shortages.
These prices will inevitably feed through to higher inflation as
we head into the summer, though there’s much uncertainty
as to how long the inflationary impact will last. Importantly,
supply delays will need to ease markedly from near-record
levels to help being price pressures down.”