The USD is ending the day as the weakest of the major currencies. The EUR was the strongest  followed by the AUD.  The green back seemed to have benefitted from rising stocks which pushed funds out of the “relative safety of the USD” (or that is what the story will say).  The thinking goes, if the US booms, that will help the EU (again this is what the story will say) 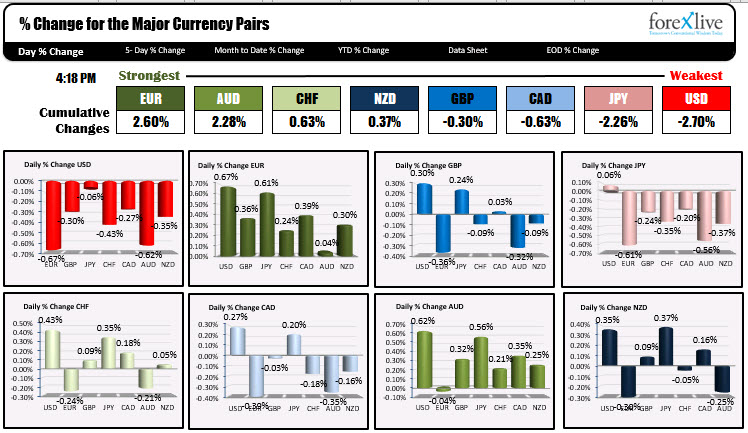 The fall in the dollar comes despite higher yields for the day. The 10 year yield moved up by 1.8 basis points. The 5 year was the biggest mover in yields that is with a gain of 2.3 basis points.

Helping the run to the upside in yields today was much better economic data. The Markit services PMI index rose to the highest level on record at 63.1 (vs 60.4 in March). The manufacturing index also was strong at 60.6 versus 59.1 last month.  Also surprising to the upside was a new home sales which rose to an annualized sales pace of 1021K vs estimate of 885K and last months 846K (revised from 775K).  The sales pace is the highest since December 2006.  The US has had mostly solid economic data of late.  Yesterday we saw initial jobless claims fall to the lowest level since the pandemic began. A week ago, retail sales surprise the upside (9.8% versus 5.8% estimate). Next week durable goods orders will be released on Monday for the month of March. The Dallas and Richmond Fed manufacturing indices for April will be released. The FOMC rate decision will be announced on Wednesday. Will the Fed be scared about potential inflation?.

For the week, the same strong and weak currencies held the same spots. That is the EUR was the strongest, while the US was the weakest. The EURUSD was the biggest mover. The USD fell by -0.94% vs the the EUR. The USD was lower by -0.83% vs the JPY and -0.78% vs the NZD. 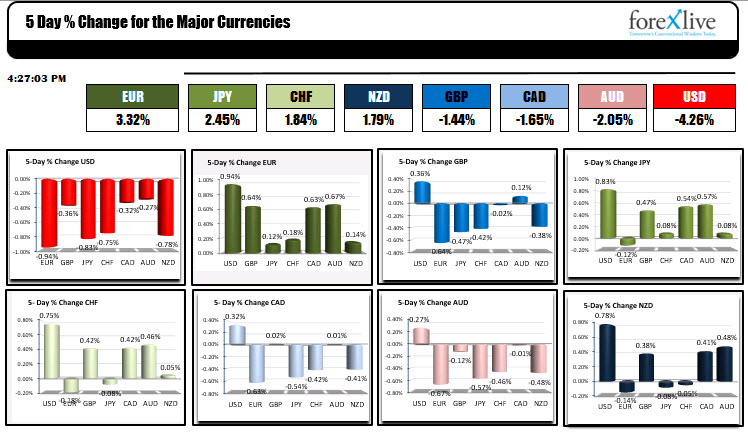 Looking at interest rates for the week, although data was relatively strong, the US yields fell during the week, led by a -3.03 basis point decline in the 30 year and a-2.38 basis point fall in the 10 year.  The overall fall in yields was likely helped by a strong 20 year bond auction this week where the auction yield was -0.9 basis points less than the WI at the time of the auction (indicative of a strong investor demand). Since peaking at 1.774% in the 10 year, the yield has fallen to as low as 1.53% this week.  So although the yield rise today did not make sense with regard to the falling USD, the yield fall this week and a lower dollar tends to make a little more sense.

In the stock markets this week, the major US stock indices all ended marginally lower with the Dow industrial average falling -0.46%. The S&P index declined by -0.13%. European indices did not fare as well with the German Dax falling by -1.17%. The UK FTSE falling by -1.15%, and the Italy’s FTSE MIB falling by -1.45%. The biggest gainer for the week was the Shanghai composite index which rose by 1.39%. The Russell 2000 also showed a positive gain for the week up 0.41%.  In the US, the markets were spooked on Thursday after reports of a potential sharp rise in capital gains taxes in the Biden economic plan. However, today’s price action showed a sharp rebound, erasing most of the declines

Thank you for your support this week. Have a safe weekend