The USDJPY has been trending to the downside in the month of April (with the last swing high on March 31).  The move above the 200 hour moving average today is the first break above since April 6.

Taking a broader look at the daily chart (see chart below), the fall from the March 31 high corrected below the 38.2% retracement at 107.761. However that move below only lasted for parts of two trading days. The rise back to the upside has taken the price back above the March 23 swing low at 108.384. That might be a support level going forward if the buyers are to remain firmly in control. Other support could extend down to 108.158 which was the swing high going back to July 1, 2020 (see yellow area in the chart below).

When looking at the daily chart, the trend in April lower has seen the price move down from one 110.96 to 107.471. However, the correction was only marginally below the 38.2% retracement AND upward sloping trendline. So there is the potential that the correction is over. The price can resume or momentum.

Of course, that road map is uncertain. Hence the targets off the hourly chart become more important in changing that mindset. So watch the swing area on the hourly chart and then the 38.2% retracement for more positive clues if the low is in place. Conversely, if things like the 200 hour moving average are rebroken on the downside, the selloff may not be over.

As London/European traders looked exit, the GBP has taking over the strongest spot for the major currencies. The JPY is now the weakest currency after the NZD held the spot at the start of the North American trading day. 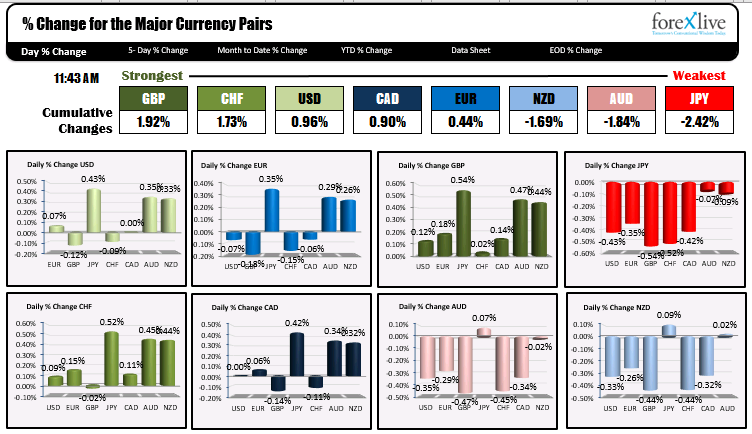