The USD moved lower in early NY trading continuing the corrective moves to the downside for the greenback for the 3rd day in a row.  However, as rates started to move back higher, and some technical breaks failed, the greenback reversed back higher.  The declines were erased vs the EURCHF and CAD.  The greenback moved off lower levels (but still closed lower) vs the GBP, AUD and NZD.

Overall, the NZD and AUD is ending the day as the strongest of the majors. The JPY  is the weakest.  The USD is in the middle of the rankings of the major currencies today. 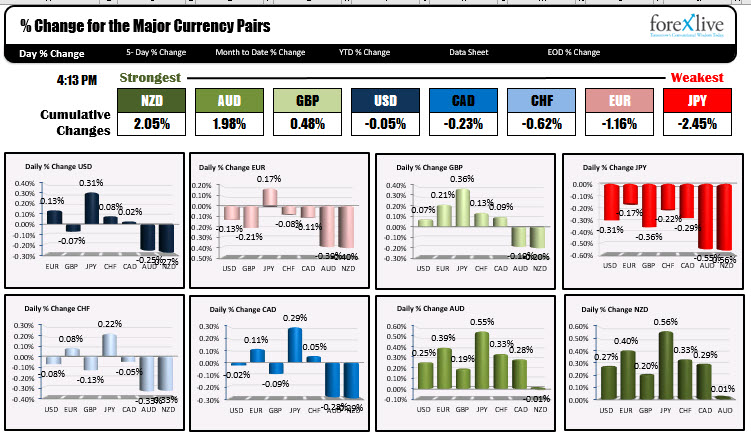 Rates did move higher today, led by the 2 year yield which resumed its move higher. It is trading at 0.266% up 3.8 basis points on the day. The other parts of the yield curve were also higher with the 5 year up 2.6 basis points. The US treasury auctioned $61 billion of 5year notes that were met with so-so demand.   The auction will continue tomorrow with sale of seven year notes.

Fed’s Bowman, Bostic gave their post FOMC opinions today for the first time since the meeting. Bowman said there are 10 million people still without jobs, but inflation is likely to increase further. She did also add that supply chain bottlenecks could take some time to ease. Fed’s Bostic said that he was one of the 7 fed officials who moved his dot to 2022 from 2023 and that the Fed is close to meeting “substantial further progress” standard. He also said that he expects 2 other tightening’s in 2023 (he is normally not that hawkish).  Later in the day, Fed’s Kaplan (hawk) reiterated his previously expressed view that rates would begin to rise in 2022.  The general comments from the Fed officials were lightly supportive of a higher dollar.

In other markets today: