The biggest move into the NY open came in the UK after Scottish election results will likely push out ideas of an independence referendum out a bit into the future. The GBP moved sharply higher, and moved a little higher in the NY session but relatively speaking the price action was more confined.   Overall, the GBP was the strongest of the majors by a lot. The EUR, JPY, NZD  were the biggest losers.  The USD was modestly higher or lower against majors with the exception of the GBP where the greenback lose over 1.0% on the day. 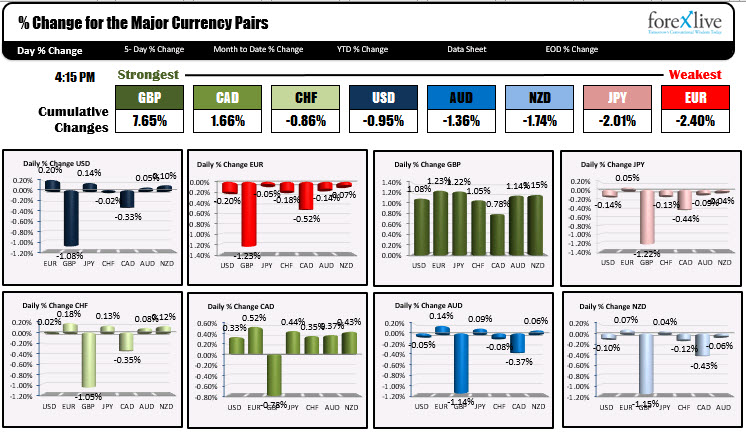 What DID move were the US stocks.  Prior to the opening, Citi downgraded Facebook and Google to hold on the expectations that ad business has probably peaked, and that year on your comparisons will become harder to beat going forward.   They surmised that slowing of growth trends traditionally is not good for their stock prices. As a result the NASDAQ stocks opened lower and continue to move lower during the day.

Meanwhile, the rotation into the cyclical Dow stocks worked until even those gains (up 313 points at the highs) started to be eroded and then completely retrace (and then some). The decline of -34.94 points in the Dow, ended a five-day winning streak for that index.

Meanwhile the NASDAQ index, after a close higher on Friday, reversed sharply to the downside and is closing below its 100 day moving average at 13417 for the first time since mid-March (when there was one day where the price closed below that MA level).  Tomorrow will be key as traders will be eyeing if two successive days can close below the key moving average level (a first going back to 2020).  Be aware. PS European stocks ended the day mixed. Germany, UK, France or closed within 0.1% of Friday’s levels. Spain’s Ibex and Italy’s FTSE MIB were up 0.9% of 0.8% respectively.

Also causing some consternation in the markets was a move back higher in rates, mostly in the NY afternoon session.  The tenure yield is trading up around 2.3 basis points at 1.600%. That is up from 1.557% earlier in the day. The 30 year yield is trading up 4.8 points to 2.324%. It’s low yield was down at 2.270% .  Supply may be an issue in the debt markets. Amazon and T-mobile came to the market with near 20 billion of new debt. Starting tomorrow the U.S. Treasury will auction off $58 billion of three year notes, followed by $41 billion of 10 year and $27 billion of 30 year issues on Wednesday and Thursday.

Fed speak today had Dallas Fed Kaplan still calling for discussions on taper to start but was a little less sure given the employment numbers on Friday.

Fed’s Daly and Evans were more in the camp that they were positive for the growth and continuation of employment trends, but were not ready to start talking taper.