Forex news for North American trading on May 6, 2021

The markets are in flux as traders ponder the implications of reopening and the potential for tapers.

The BOE hinted that they may look to taper later in the year, but not yet. The GBP initially moved higher, but move back down shortly after the fireworks subsided.

Meanwhile, the CAD dollar continued its move to highs despite lower oil prices. The USDCAD has been trading lower since the BOC decision to taper on April 21 when they DID announce a taper of QE. Today the USDCAD pair traded to the lowest level since September 2017 after cracking below the low from 2018 at 1.22455. The low today has reached 1.2143. The price high on April 21 – the day of the BOC decision – was at 1.2622. Eight of 12 days have been down (with the up days really more sideways vs up). The total tick move to the downside in the pair has been 479 pips in 12 trading days.

In the US today, Fed’s Kaplan – the most hawkish of Fed officials – painted a more detailed picture on why he favors the Fed board to bring forward taper talk.  He cited the increased vaccinations along with more fiscal stimulus.

His comments helped to push the Nasdaq to a low of -1.05% on the day and it seemed a certainty that the index would close down for the 5th consecutive day.

However, Fed’s Mester and Bostic were a little more Fed mainstream where inflation is not a problem, and late day buying perhaps ahead of the key employment report tomorrow, helped to power the stocks higher into the close. The Nasdaq closed positive for the 1st time in 5 days, the Dow closed higher for the 4th consecutive day, closed at highs and at made a new all-time high price.

In Europe, some late session buying also pushed indices higher. Below are the final numbers for the North American and European indices.

While the CAD continues to run higher, the BOE hint of taper, initially led to a higher GBP, but the momentum faded fairly quickly and the GBP is trading lower on the day. In fact it is the weakest of the majors.

The USD is also weaker on the day. 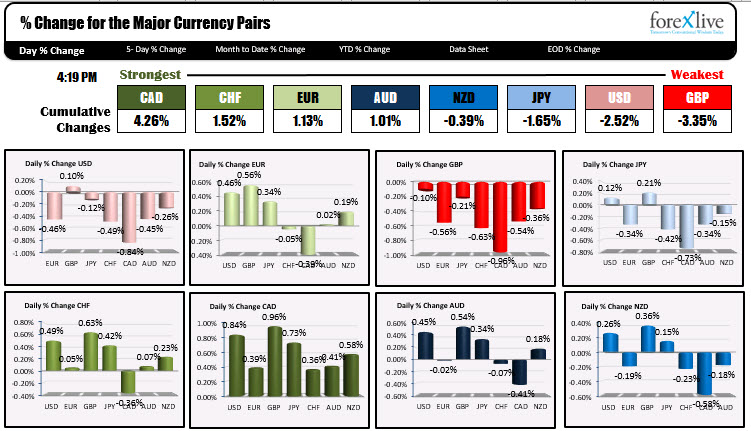 In the US debt market, yields traded above and below the unchanged level on the day. The 10 yield each day high of 1.5891% and traded as low as 1.555%. The issue is trading at 1.569% +0.3 basis points near the close.  Below are the highs and lows and changes for the day. The two – 10 year spread is closing near unchanged, reflective of the uncertainty at current levels. Tomorrow’s employment report should give treasuries a shove one way or the other.

Once again, the US will release their jobs report tomorrow with expectations for 1M new nonfarm payroll jobs being added. The employment rate is expected to dip to 5.8% from 6%. The average hourly earnings are expected to come in unchanged versus -0.1% last month. The market might eye that portion of the report for signs of increased wage inflation.

Canada will also share the spotlight with the US this month as they too will release their April jobs report.  IN contrast to the sharp rebound in the US, the rotations in Canada for a -150K decline in net change in employment after the oversized 303.1K gain last month.