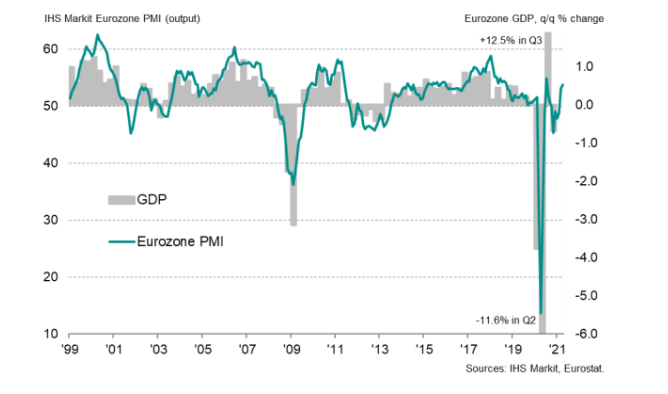 Some modest beats there, with the headline reading coming in at a eight-month high and the composite reading at a nine-month high. Of note, the manufacturing index and output sub-index are at record highs, since the series began in June 1997.

This just reaffirms a solid expansion in manufacturing activity with services also seen picking up marginally, although lagging much behind factory activity – which is led by Germany. Markit notes that:

“In a month during which virus containment
measures were tightened in the face of further
waves of infections, the eurozone economy showed
encouraging strength.

“Although the service sector continued to be hard
hit by lockdown measures, it has returned to growth
as companies adjust to life with the virus and
prepare for better times ahead.

“The manufacturing sector is meanwhile booming.
Pent-up spending, restocking, investment in new
machinery and growing optimism about the outlook
have all helped fuel a further record surge in both
output and new orders.

“The steep rise in demand for raw materials is
continuing to lead to unprecedented supply chain
delays, which are in turn driving up firms’ costs at
the fastest rate for a decade. Consumer price
inflation may well rise sharply in coming months as
a result, though the extent of the rise will be
dependent on the strength of demand and the supply situation, both of which remain highly
uncertain at the moment.”