T minus 22 hours until the FOMC decision at 2 PM ET.

The Fed is expected to keep rates on hold, but could look to start telegraph taper ideas.  The data today saw retail sales give back some of the gains seen over the last 2-months.  PPI continues to show pipeline cost pressures  (up 6.6% YoY) .  Industrial production and capacity utilization came in better than expectations, but the prior month was revised lower. US business inventories showed a decline and combined with sales, the inventory-to-sales ratio is near low levels which could be more inflationary down the road. The NAHB housing market index dipped from last month and was lower than expectations but still remains elevated.

In the commodities markets, the price of lumber – which skyrocketed this year until May 10 when it peaked at $1738 –  continued its run to the downside since peaking, and moved to the lowest level since April (low reached $943 today). That move is down 41% from the high.  That is certainly good news for the inflation trends for the Fed.

We will see what happens tomorrow, but what we know is the Fed has one eye on inflation, and another eye on the 7.5M of workers still out of work.  Moreover, they are anticipating the reopening bottle necks will dissipate  as time goes by.

Looking at the forex market today, the CHF is the strongest and the CAD is the weakest. The CAD weakness is despite a run up in the price of crude oil which took the price above the $72 level for the first time since October 2018.  Crude oil futures in after hours trading is moving even higher after a larger than expected drawdown of inventories from the private oil inventory data (-8.54M barrels vs estimate of -3.5M).  The price of crude is trading at $72.43. That is up $1.54 or 2.19% and just off the high at $72.48. 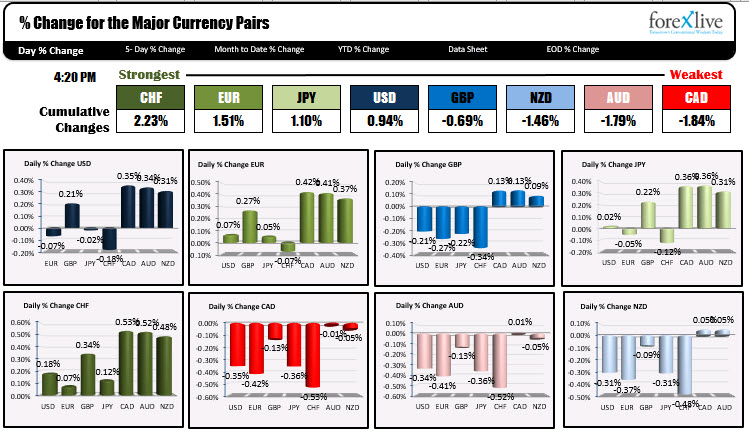 In the US debt market today, yields are ending mixed with the two year up modestly, the 30 year up modestly and in between the five and 10 year yields down modestly. The treasury auction of $24 billion of 20 year bonds was met with very strong demand. If there is concern about inflation, the auction and yield dip seen of late, is not showing investors are all that worried.

In the US and European equity markets, the major US indices all fell. In Europe, Spain and Italy ended in the red but Germany, UK, France all closed higher. The US decline was led by the NASDAQ index X which felt -0.71% one day after closing at an all-time record high (not much momentum on that break)

Some technical levels to eye in the new trading day: