The USD is mixed

As the North American session begins, the AUD is the strongest and the JPY is the weakest. In the US the greenback is tilting to the downside with gains vs the JPY and CHF and declines vs the EUR, AUD, CAD, NZD and GBP.  Evergrande remains an issue in China with the PBOC injected funds in the market to ease the market concerns and stress from the $300 billion imminent default (or so they speculate). The action by the PBOC gave the China stocks a boost. The fallout from a potential default is higher nor prices have been moving to the downside in anticipation at China development will slow. In the US today the University of Michigan consumer sentiment is the only release. The big event up ahead is the FOMC meeting which will conclude on Wednesday.   Crude oil prices are off modestly. Gold is up modestly after the near $40 decline yesterday. 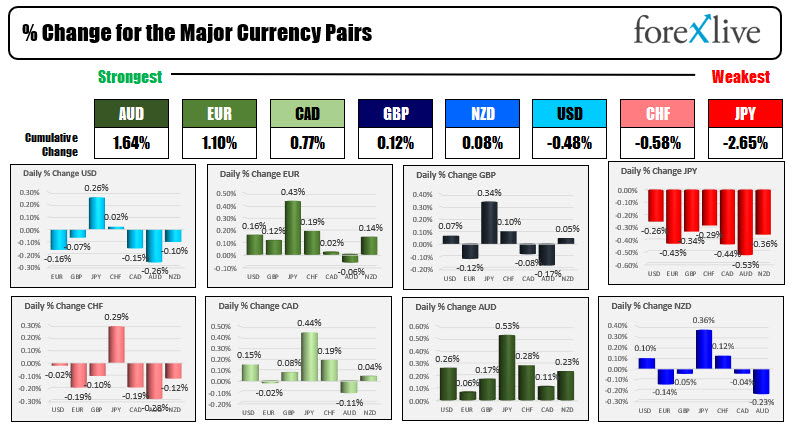 A close look at the markets as New York trading gets underway shows:

In the US stock market, the major indices are down after mixed results yesterday saw the Dow and S&P moved modestly lower while the NASDAQ index reversed declines and closed up modestly:

In the European equity markets, the major indices are mostly lower with the exception of the Spain Ibex:

In the US debt market, the yields are modestly higher: