The JPY is the strongest and the AUD is the weakest as North American traders enter for the day. The moves in the forex, are the usual flight to safety ones. The USD and the CHF are just behind the JPY as the strongest. The commodity currencies are getting hit.  China worries from regulation along with Covid concerns are drivers. The Fed minutes showed the Fed is moving toward a taper, timing is still not set in stone but possible by year end. Next week, Fed Chair Powell speaks at Jackson Hole (August 26-28). The market will certainly be focused on his words for any clues to a more specific taper schedule.  He may defer to the September meeting too, and if there is more unrest in the market and the risk of the Delta variant increase, it may feed into his more dovish hands.  Stocks are lower for the 3rd day in a row (Nasdaq for the 4th).  The treasury yields are lower with the benchmark 10 year yield down about 5 basis points.  For the time being today, it is flight to relative safety flows. 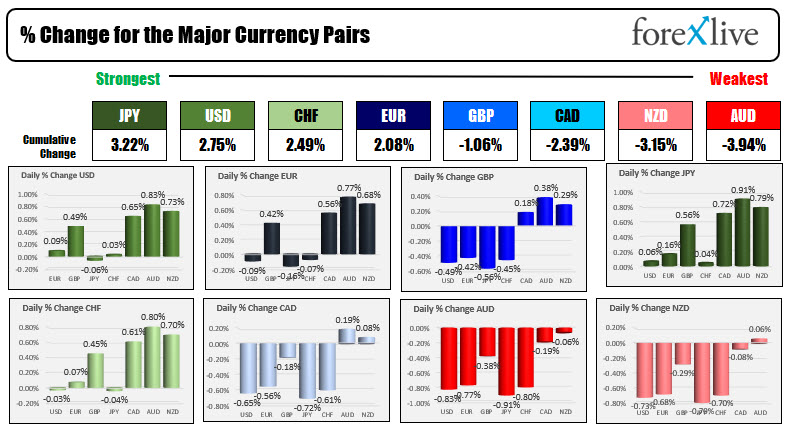 At 8:30 AM ET/1230 GMT, the weekly US unemployment claims will be released with expectations of 362K vs 375K last week. The jobless claims coincides with the typical payroll survey period.

The Philly Fed manufacturing index will also be released with expectations of 23.2 versus 21.9 last month.

In Canada the ADP nonfarm employment change estimate will be released last month the jobs data showed a -294.2 K value.

No Fed members are expected to be speaking today, but you never know when one may show up in the media.

Looking at other markets as the North American session begins:

In the premarket for US stocks, the major indices are trading lower

In the European equity markets, the major indices are tumbling lower:

In the European debt market, yields are mostly higher despite the run lower in stocks.  No flight into the relative safety of the German 10 year today.