So much for letting prices run hot 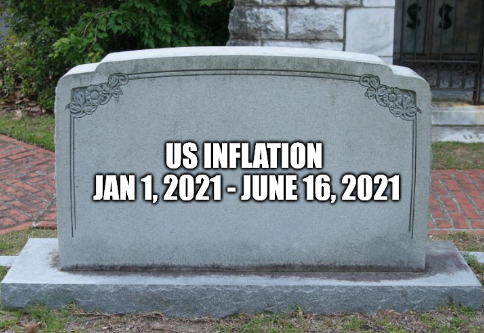 The picture in the market is increasingly clear: Trades that benefit from inflation are reversing  today in a big way.

It’s exactly what you would expect to see on the reflation trade unwinding.

Yesterday, Paul Tudor Jones said that if the Fed was dovish, it would be time to go all-in on the inflation trade. Well they were dovish and today the market is racing in the other direction.

For six months, it’s been a spectacular trade but it depended on the Fed and other central banks letting inflation run hot. That’s exactly what they said they would do but with a big shift in the dot plot and Powell’s rhetoric, big doubts are emerging.

“Many participants are more comfortable that the economic conditions in
the committee forward guidance will be met somewhat sooner than
previously anticipated,” Powell said yesterday. “It wouldn’t surprise me, if there’s an element for some people — seeing
the inflation performance that we’ve had — thinking that they have
more confidence in seeing inflation above 2%; that it may not be as hard
to do that as we thought. Inflation expectations may move up as a
consequence of this.”

The Fed had long promised temporary inflation and also promised to look through it and wait for hard data on a recovery in order to promote a ‘broad and inclusive’ recovery. That’s taken a major hit.

The credibility and unity the Fed had is gone but I’m not sure it’s dead yet. Every Fed member gets a dot but the Governors control policy. Powell still has the power to let inflation run hot and the dots don’t have any real power. Perhaps this was a tactical retreat for Powell as he prepares to dig in when the real taper and rate hike discussions begin.

I think that’s a reasonable view but for now, you have to take what the market is giving. At the same time, tune into upcoming comments.