In the long term, demographics are everything 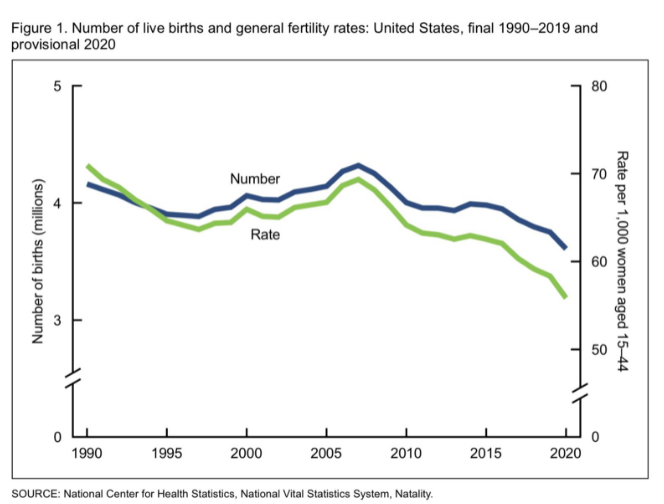 Fewer babies means fewer consumers and that’s a major deflationary force. The developed world can supplement that with immigration but the birth rate in the developing world is also falling sharply.

In 2020, the US birthrate fell to 1.64 births per woman, well below the 2.1 replacement rate and down 4% year-over-year. It’s important to note that the pandemic would have had little effect on the number because almost all babies born in the year would have been in utero before March 2020. However there is early evidence that 2021 will be another decline because December births were down 8% year over year. That’s when babies conceived at the start of the pandemic would have been born. I suspect some of that will reverse coming out of the covid-19 but the longer-term trend is inarguable.

Due to the pandemic, the US also had higher deaths in 2021 and 25 states had more deaths than births.

Maybe the most-shocking statistic in the report is that the average age of women at first birth is 27, up from 23 just ten years ago. That’s come with a collapse in teen pregnancy.

Meanwhile, other countries are far worse than the US. In South Korea, the fertility rate is under 1.

I’ve written on the problems of falling birth rates before: