The USD is making new highs versus all the major currencies with the exception of the JPY.  The the greenback is the strongest of the majors with the largest gain coming verse the CAD at 0.54%. 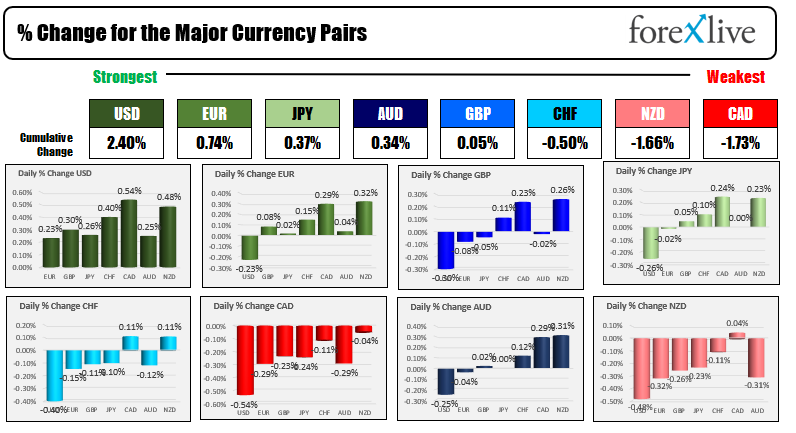 GBPUSD: THe GBPUSD as well below the 50% midpoint of the move up from the August 20 low. That level comes in at 1.37569 and would be a close risk level for sellers looking for more downside momentum. The low from yesterday at 1.37636 is a another risk defining level.

Going back to September 2020, a swing high at that time came in at 0.92956. In March and April of this year the price moved above and below that level. Nevertheless the move above that swing high is another positive/bullish development. The next upside target on the daily chart would come near 0.93606 to 0.93753. Those levels represent swing lows and highs going back to June 2020 (see blue numbered circles).

USDCAD: The USDCAD is the biggest mover of the majors but has run into resistance against the September 8 high at 1.27611. The high price just reached 1.2762 and has backed off. The pair currently trades at 1.2752 as I type.  On further upside momentum, the 61.8% retracement at 1.27742 would be the next upside target on a break. Getting above that level opens the door for further momentum in the bullish/upside direction.

The move higher today was able to get above the September 9 high at 1.27269, and the 50% retracement of the move down from the August 20 high at 1.27204. Traders will watch that area for support on any dip. Stay above, keeps the buyers in control.